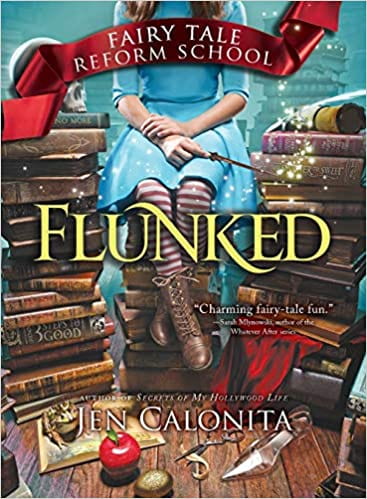 Is this book a Window or Mirror? Well, before I get to that I need to tell you what a window or mirror is. You probably already know what both of those things are but I’m taking about metaphorically. Metaphorically a window book is a book that does not look into your world. Like in my life I don’t have magic so if I read a book about magic it would be a window book. A mirror book you guessed it is a book that reflects your life! So if there was a book about a girl who cat died and is trying to get over it that would be a window for me. (Because my old cat died.)

So now that I’ve told what a window or mirror book is I should tell you about the book. Flunked is a story that takes place in fantasy world. So you know the story of Cinderella or Snow White well this is a world that takes place after those stories were told. Cinderella’s stepmother made a school for kids who are going down the path of evil or pranks and trying to reform them. She calls the school fairy tale reform school. It is taught by some of the former villains in the fairy tales that have turned good. So Gilly Cobbler the main character is a pickpocket that is trying to feed her family and lands herself in Fairy Tale Reform School. She tries to get out but realizes there’s a bigger mystery she needs to solve. This is a series book and has six books in the series. The author is Jen Calonita.

So now I’ve told you what a window and mirror book is and I’ve told you about the book. So now I can tell you of if this is a window or mirror book for me. It is you probably guessed it… a window! I don’t have magic. We don’t have wicked stepmothers it is a fantasy and resembles nothing of my life. So for me this book is a window, and I think it’s safe to say it is for you too!

Anyway thanks for reading. I hope you want to read Flunked! Have a nice day!